Create an Account - Increase your productivity, customize your experience, and engage in information you care about.

Agriculture is a strong economic driver for the county and supports hundreds of local businesses ranging from farms to service providers and retail shops.

The local agriculture industry generates near $140 million in direct sales annually. Direct economic contribution from agricultural production is estimated at over $224 million annually.

Dairy forms the backbone of Washington County's agricultural economy. Beef, other livestock, field crops, maple syrup, and apples are amongst the important commodities produced here in Washington County. Many of these commodities drive numerous ancillary business such as hard cider and cheese production. The Equine industry, with its established ties to nearby Saratoga, is growing.

Washington County's agriculture is also strongly connected to TOURISM. Many area farms are open to the public. Tours such as Maple Weekend, Fiber Tour, Cheese Tour, as well as the Craft Beverage Trail entice thousands to the area each year.

Explore the influence of agriculture on the economy in Washington County by clicking on the image below. 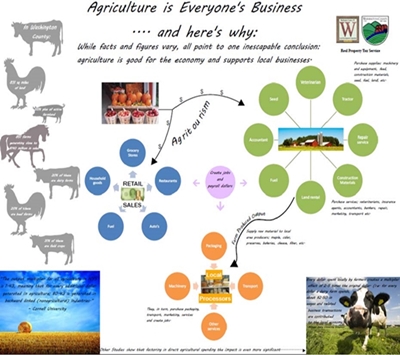